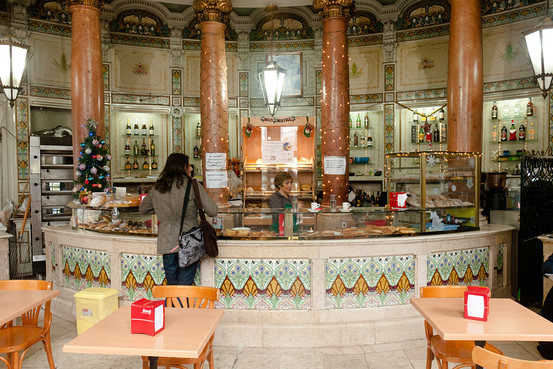 Lingering Over a Bica in Lisbon

In the Portuguese capital, coffee is an art form; locals and tourists sip and savor a national obsession

Príncipe Real is a symbol of the new Lisbon. Hovering above Barrio Alto, home to the city’s thriving nightlife, the hilltop neighborhood is in the throes of gentrification, filling up with trendy restaurants, galleries and shops. But start a stroll along the district’s main drag, Rua Dom Pedro V, and you are never more than a couple of meters away from a traditional Portuguese coffee bar, or pasteleria, serving up the country’s timeless obsession—a good cup of coffee.
Longer than an Italian espresso, less bitter than a Spanish café solo and as potent as Turkish coffee, a bica—as Lisboans call a shot of black coffee—can be a revelation.
“The Portuguese have a great coffee culture,” says Portugal’s German-born celebrity chef Joachim Koerper, whose Lisbon restaurant Eleven was the first Lisbon eatery to win a Michelin star. He says the quality of the coffee is due to the high quality of the beans, which now often come from Brazil, the former colony still linked to the country by language. “Portugal gets the best,” he says.
The Portuguese coffee ritual starts early in the morning, often with a bica, served in a short, narrow cup, like a large thimble, and usually drunk black. (Portugal’s version of a latte, called agalão, is less popular than similar drinks elsewhere in Europe.)
The place of choice is the local pasteleria, a cross between a Spanish bar and a Frenchboulangerie, and the coffee is often accompanied by a mysteriously crunchy custard tartlet, called a pastel de nata, which you can consume in a few bites.
The bica ritual might be repeated up to four or five times during the day, and the Portuguese believe their bica can hold its own against the very best Italian espresso. “We do double,” says Rui Miguel Nabeiro, chief executive of Grupo Nabeiro/Delta Cafés, producers of Delta, Portugal’s leading coffee brand, when comparing the two. An espresso is around 20 milliliters, he says, while the Portuguese version (which might also be called a “café” or even an “espresso”) is 40 milliliters. He also says the roast is different.
“Today it’s usual to roast coffee for five minutes at a high temperature—beyond 200 degrees.” He says this kind of “quick roasting” actually burns a bit more coffee. “We keep old-fashioned roasters,” he says, heating the beans for up to 20 minutes at around 80 degrees. He also says the Portuguese continue to rely on the robusta bean variety, thought to be of a lower quality than arabica. This “cultural thing” is a holdover from the many decades when just about all Portuguese coffee came from the African colonies of Angola and the island of São Tomé and Príncipe, off the Central African coast, which only grew robusta. Today, Delta’s most popular blend, called Platina, is around 30% robusta beans.
Lisbon’s coffee has an old-fashioned goodness, but contemporary pastelerias also come in many different shapes and sizes. The place to start is the city’s most famous, A Brasileira, a century-old coffeehouse, down the hill from Principe Real in Chiado, Lisbon’s main shopping district. Once a literary hangout, associated with Portugal’s great modern writer Fernando Pessoa, some natives now write it off as touristy and overpriced. The brass-and-wood Art Nouveau interior is breathtaking, however, and the coffee is as good as you will find anywhere.
In Principe Real, get a glimpse of the real Lisbon at the corner of Rua da Rosa and Dom Pedro V, where an early 19th-century Italian bakery, featuring a superb interior, with neoclassical tiles and pillars, has been converted into a neighborhood pasteleria called São Roque. Locals still line up to buy the excellent bread, but you can also sit at a table and have a coffee and pastry.
Down the hill from Principe Real, in a leafy square called Praça des Flores, Pão de Canela (www.paodecanela.com) offers a wide variety of homemade pastries, including pastel de nata flavored with orange.
For a perfect cup of Delta Platina coffee and the freshest custard tarts, make the trip out to Belém, the riverfront district home to many of the city’s leading art and architecture attractions. Here you will find the cavernous, blue-and-white tiled Antiga Confeitaria de Belém (www.pasteisdebelem.pt), makers of Lisbon’s best-known pastel da natas. Based on an old recipe inherited from a monastery, the pastry has its own trademark name—Pastéis de Belém—and manages to be lighter, creamier and crunchier than its competitors. The on-premises bakery produces around 20,000 tarts a day, says Miguel Clarinha, who co-owns the business with members of his extended family. The high turnover means you always eat the tarts warm, he says, which is ideal. It also means you can expect to stand in line, no matter the weather. 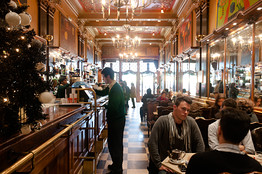 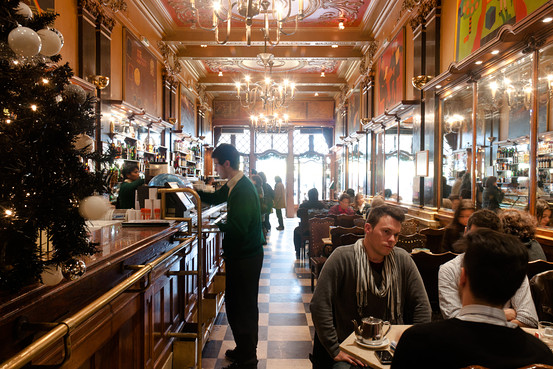 One of Delta’s largest private customers, the bakery maintains its coffee quality with special machines distributed and maintained by the coffee producer. The bakery is itself a leading tourist attraction, however Lisboans have managed to reclaim a presence, now making up about two-thirds of the clientele.
Lisboans have also reclaimed Café Pois (www.poiscafe.com), a funky café housed in a 17th-century warehouse in Alfama, one of the oldest parts of Lisbon, in the shadow of Castelo de São Jorge, the historic city’s castle fortress. Opened five years ago by two young Austrian women, the café has a mix-and-match décor, which first drew a large tourist crowd but has increasingly been taken over by Lisbon hipsters. In spite of the homemade Austrian treats, like apple strudel and Sacher torte, the coffee is Portuguese.
Café Pois offers Austrian off-menu coffee specialties, which often include milk or whipped cream. The Portuguese “find these drinks amusing,” says Barbara Ostwalt, the 35-year-old Salzburg native and co-owner, but they still prefer their “small espressos.”
Back in Chiado, another twist on the pasteleria is the five-year-old Royale Café (www.royalecafe.com), with a sleek Scandinavian interior, where you can sample Delta’s all-arabica premium blend, Diamante.
With Danish and Swedish cafes as the model, Royale Café includes main-course salads—unusual for Portugal. Visitors are greeted with a Danish Modern Louis Poulsen lamp, but the tableware comes from the classic Portuguese ceramics maker, Bordallo Pinheiro.
The ultimate Lisbon coffee experience can be had in the city’s beautifully situated outdoor cafés. Lisbon, with its steep hills and winding streets, is filled with secluded squares, many of which combine relative quiet with spectacular views. At Miradouro de São Pedro de Alcântara, at the top of Principe Real, the square’s tree-lined café overlooks a stunning fountain, as well as the undulating heart of Lisbon.
The differing coffee-drinking possibilities share one trait: they all encourage the art of lingering. “The Portuguese cannot imagine drinking coffee from anything other than a ceramic cup,” says Diogo Coelho, the London-based founder of Royale Café. “Drinking from a paper cup is unimaginable.”